ASUS motherboard of some type

I also have an HTPC in the living room with 2 x 3T drives, i3 , 8G  and an intel 80g SSD as the OS drive, which i have iSCSI links to for my VM's i play around with between dieing in TF2.. maybe i should stop dieing so much.

I built my system around four months ago.

My current specs of my desktop, still kinda out of commission:

You can find me on myanimelist.net here!

i love the NZXT cases, i had one for my last rig i sold to a friend, so much space! was hard going mITX from it. 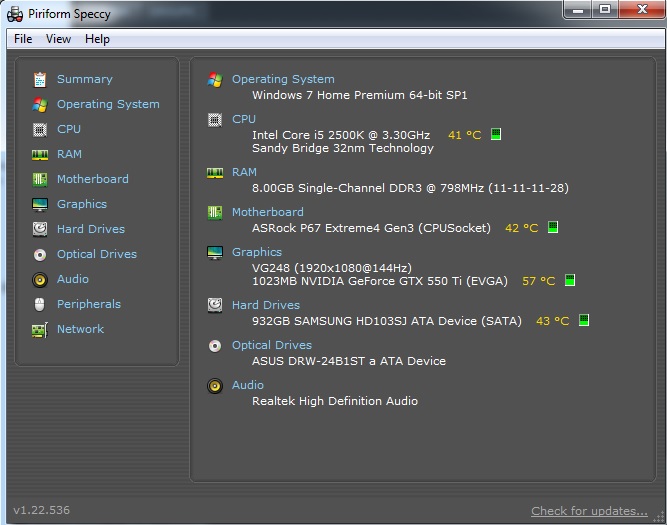 i dont blame ya, i didnt even think to do that!

4.00GB Dual-Channel DDR3 (3rd dim got cooked a while back and I never bothered to order another)

I love windows 8 but at the same time can list several reasons why it sucks. I used to be a sub-contractor for a small IT company. I mostly did security hardening and general optimization so I know a thing or two about Windows pcs

* it forces you to load some security bullshit before your operating system even if you don't want it to.  this well help you waste your write cycles if you have a SSD.

* there have been numerous updates in the last few months that have completely crippled many pcs. Microsoft has barely responded.

* the metro interface does suck solely because it offers nothing except more clicking to people using mice.

We already have a desktop so this cell-phone-esque menu is a waste of hard-drive space, system resources and time. This is exactly why that new 8.1 update allows you to boot straight to the desktop app.

* Multi-monitor setups suffered from so many bugs at first it was lol-worthy. They've fixed a few bugs but many remain. Mostly shit that was fixed in previous versions of windows. Flash Player and Unity 3D issues come to mind..

* Windows randomly asked me to re-activate even though I use a 100% legitimate copy of Windows -- got it for free by asking at my local YMCA. The system admin there had a business key he used to upgrade every computer and said "one more copy won't hurt the wallet much". This is interesting because I've pirated every other version of windows and never once had any similar issues

* I swear to god Microsoft is somehow throttling every browser except Internet Explorer. OK probably not but IE is definitely the snappiest browser I can get right now. Suck it up and use IE right? Have you ever tried to browse the internet without an adblocker? It's not possible after you're so accustomed to an ad-free internet

You said just a few right? OK I'm done. But think about this for a minute: There weren't ever mass amounts of people saying any other version of Windows sucked. Even during the whole upgrade-from-xp-to-vista era-- People only complained that all the changes in the new OS were unnecessary, they never said it sucked.

Microsoft really fucked up big-time with their newest operating system as well as their newest console. They're still an amazing company so I'm not surprised at how well they've recovered.

This is the laptop I just got for college/gaming.

Not the best specs, but it lets me play most games. I've had it for almost two years now.