I was expecting a "Sexi Microsoft" there.

Hmmmm seems like my PC is very outdated compared to everybody else's...

Graphics: Some ATI switchable glitched up graphics card that is very unstable.

Mind you, I got this 3 years ago. It still runs tf2 and dota2 pretty well so I'm content.

Topped off with a 23", 1080p monitor, Razer Deathadder mouse, and a stock Alienware keyboard.

Oh and it glows.

Oh and it glows. 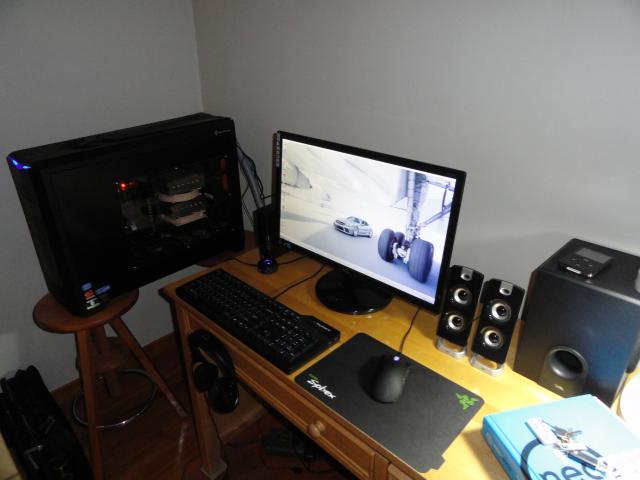 I was expecting a "Sexi Microsoft" there.

I know, I almost couldn't order the parts because it's just too sexy.

Drifting in the wind...

Mother Board: I cant remember what it was but it had 3 RAM and 2 graphic slots, power failure resistant, heat resistant, shock resistant, water resistant.

"All their everything is on the cliff!" - Contra
"Fuck off" - Cayda
"Slink, are you single and ready to pringle?" - Contra
"Maybe you should stop bitching and give us some heals" - Daddy
"You sir, are a strange proffesional killstreak unusual burning vintage genuine piece of shit" - Lightbringer
"We have a major fedora problem out here" - Dija
"m8" - munchyBanana
"Roses are red, violets are blue, get on the cart , u stupid cartbitch u" - Mama

I built mine over four years ago. It still runs Team Fortress like a beast. I don't play many other games but it can still handle everything without issue. Note: The i7 processor was before they split it into the i3, i5 and i7. It would have been an i3.

Currently on the laptop, hoping to upgrade to a real PC when I get a job. XD

5.9 on the Windows Experience index

It plays most games nicely. TF2 runs great, Skyrim is fine on medium settings, Far Cry 3 on lowest possible settings is getting into lower framerates though.

Another HP dv6 user! Does yours have overheating problems and broken hinges/screen/base?

Who needs a keyboard when you have a laptop? I actually like the HP keyboard.

The last PC I built was over 4 years ago and we've since turned it into a L4D2 server to play with friends.

Due to moving around a lot, I keep to laptops and will probably stay this way until I've settled somewhere after school (I don't have nifty suitcases to haul a tower + monitor around like...I don't remember who showed me that?  Rann, maybe?  I can't remember who anymore, sorry D: )

Right now, mine's an Asus G750JW.  It was a birthday/anniversary present from my boyfriend:

@5centsable Another HP dv6 user! Does yours have overheating problems and broken hinges/screen/base?

Who needs a keyboard when you have a laptop? I actually like the HP keyboard.

Yeah, I just use the keyboard on the laptop itself. I like it enough. Yeah, it was having some problems with overheating, but as it turns out, I just needed to clean out the vents with some canned air and it started to run much quieter. As for the broken hinges, I hope to not have that happen anytime soon, but who knows!

3 Graphics cards (although not all the same). Isn't that overkill?

3 Graphics cards (although not all the same). Isn't that overkill?

There's no such thing as overkill

Especially running Eyefinity, the high resolution is very demanding. For example, you might be able to run a game at 1920x1080 at max graphics on a single 6970. But for me, I've got to render over three times the raw amount of pixels alone, at 6448x1152. Then you account for the texture quality ... at 1920x1080, 2gb of vram is sufficient to run most high-resolution textures. Having a crossfire setup doesn't increase the total vram ... I've still got 2gb vram effective, which (I never thought I'd say this) can be a bottleneck for high-resolution textures, in new games.

The cards are effectively the same ... they are all reference design, and although only 1 is officially a 6970, I flashed both of the 6950s with a bios from a 6970 to unlock the disabled shaders, and increase the frequency of both the GPU and RAM. It's like the 9800 pro all over again

As for 6TB of space ... that's my storage for a lot of Blu-Ray rips and a ton of lossless music. I have another 1 TB drive, external, for actually important files (pictures, resumes, etc). Then I have my small (120gb) SSD as a system drive. It's a pretty good system, although I'm running out of room (!)